There are lots of important things to think about when you’re in the pre-writing phase. One of those things is audience:

These are important questions that affect almost everything you do, whether you’re writing a short story or a 50 page report. In this post, I want to share our early thoughts about Bean’s audience and how it impacted the Bean in the Garden stories.

The original idea for the Bean in the Garden series was this:

It’s a story about a bean who’s walking across a garden. He’s walking toward a farm house, but he never gets there. And he has adventures along the way. In one story, he drops things, but he doesn’t realize he’s dropping them. And some peas come along and give his things back to him.

If you’re familiar with the series, you’ll see the bones of Bean Takes a Walk in there: bean, walking, dropping things, peas give them back. But a lot of the other details have changed. And it has to do with our audience. 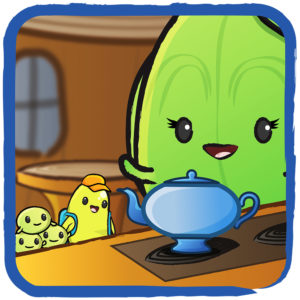 We decided early on that we wanted to this series to appeal to preschoolers and the primary grades (K-2).

As a marketer (and a parent), I learned that the best way to appeal to kids is to present them with an aspirational figure – someone they hope to be like. That’s why you see kids in commercials who are just a little too old for the toy they’re selling. Show a kid that’s the same age as your target market, and they’ll think the toy is for babies.

It’s not really logical, but that’s how humans are wired. So for Bean, we decided to make our character just a little older than our audience. To me, Bean seems like he’s in second or third grade. Hopefully he comes across that way to you!

Obviously, this characterization doesn’t jive with the spaghetti western trope of “lone man [bean] wandering across the desert [garden].” Instead, it suggests a community of vegetables, where kids live among their parents and neighbors doing normal kid stuff, like going to school and hiking in the forest. 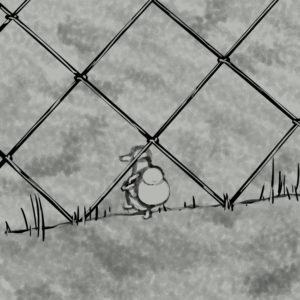 The Threat of Farmer Brown

Another thing we thought about early on is whether there would be humans in our world.

In the original concept, Bean was making his way across a garden toward a human farmhouse. There are early sketches of Bean interacting with human-sized objects, like the one on the left where Bean is walking through the opening in a giant chain link fence.

Before long, we decided this wasn’t a good direction for Bean in the Garden. Again, it goes back to audience. We never wanted to suggest any sort of threat to our characters.

Ask any third grader. (I have.) They’ll tell you that in a world full of vegetables, humans are predators. And among our little kid audience,  Bean Makes Soup (read: as an ingredient) would not be a bestseller.

So there’s no Farmer Brown or any other human who will appear to harvest Bean and his friends. Except maybe in the Halloween episode. Because even The Simpsons has the Treehouse of Horror.

Last, but not least, we thought about how our readers will consume our stories. When you’re writing books for this age group, you have to assume that many of the stories will be read to the child by a parent, teacher, or caregiver.

On the other hand, there may be kids at the top of the bracket (especially 1st and 2nd graders) who are emerging readers. So they may read the Bean books independently, or semi-independently.

Having thought about how children would engage with the stories, we were able to identify certain areas that needed our attention:

Thinking about your audience will guide you toward a story that will be engaging, fun to write, and most importantly, interesting to your readers! It can affect the characters you write about, the settings, and the problems and solutions you present in your stories. So think about audience early and often throughout the writing process.

The Writing Process 5 Ways to Help Kids Give Constructive Feedback